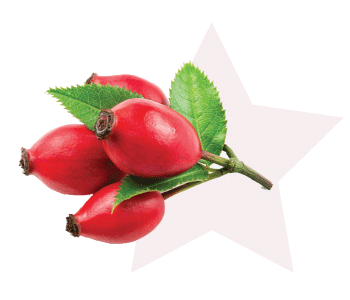 Chemical studies of rosehips have revealed a number of potentially beneficial compounds. Firstly, they have been found to contain very high levels of lycopene. Largely responsible for the red colouration, and found most commonly in tomatoes, there is evidence to suggest that lycopene offers antioxidant protection when consumed by people.

Secondly, rosehips have been found to be particularly rich in vitamin C; one teaspoon of the pulp will provide approximately 60 mg of vitamin C, which is double that of oranges. Bearing in mind vitamin C’s well-known ability to support a healthy immune system, rosehips may be just the thing to help fight coughs and colds. In addition to this Grape seed extract is also rich in Vitamin C. It Helps in Boosting immunity.

Scientists have also identified a compound within the pulp called GOPO, which is now thought to play an essential role in the anti-inflammatory benefits rosehips provide.

One of the most promising potential health benefits of rosehips are their impact on arthritic joints. A growing body of scientific research points to improvements both in joint pain scores and general mobility after taking rosehips for a period of time.

Rosehips have a long history of use in the cosmetics industry, with rosehip oil being a particularly popular format. It is also worth highlighting that vitamins A and C are two of the most important nutrients for the maintenance of healthy, glowing skin. Both of these vitamins are also found in abundance in rosehips. These vitamins protect collagen in the skin against free radical damage and premature ageing and encourage the growth and repair of skin tissue.

Rosehips ripen as the cold and flu season arrives and so provide a timely boost for the immune system. Vitamin C is one of the most popular supplements for warding off coughs and colds in the winter months. Rosehips are known to offer impressive levels of this nutrient.

Rosehips are a traditional folk remedy, used for generations to improve a range of ailments. More recent scientific studies suggest that there is some basis to the use of rosehips. Particularly promising signs have been seen for the impact of rosehip on inflammation, particularly on reducing the joint pain experienced by many arthritis sufferers. Rosehips may also help to hydrate the skin and reduce the appearance of wrinkles. 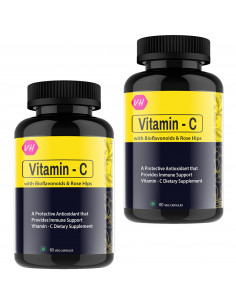 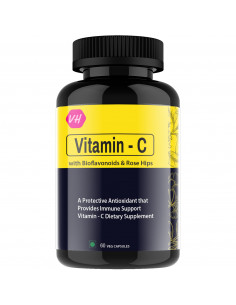 Vitaminhaat
AVFS15
6 Reviews
₹555.08 ₹1,355.08
HIGH POTENCY VITAMIN C : VitaminHaat Vitamin C with Bioflavonoid and Rose Hips is ideal for those looking to supplement their diet to meet daily vitamin C nutrient needs. VITAMIN C COMPLEX : VitaminHaat Vitamin C is formulated for both men’s and women’s consumption. It has ascorbic acid is made of other natural ingredients such as Amla and Orange peel...
You need to login or create account